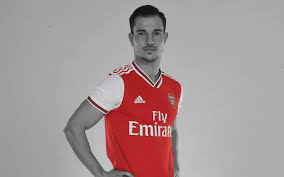 Cedric Soares has become Arsenal’s second signing of the January window as he joined the club from Southampton.

The 28-year-old has joined Mikel Arteta’s side on loan until the end of the season but he only has six months remaining on his contract at Southampton.

He will compete alongside Hector Bellerin for the right-back position.

Speaking during his first press in Arsenal jersey, Soares revealed he nearly joined the club previously in his career but did not specify when.

“It has been a while. We were close a few years ago, so it’s not the first time. It didn’t happen that time but now thank God it came true. I’m super happy,” Soares said when asked how quickly the move happen when he first heard of Arsenal’s interest.

Below are other statements Cedric Soares made during his first interview in Arsenal jersey as reported by Arsenal.com.

You’re an Arsenal player, how does it feel?

“It feels amazing. It’s a dream come true being here, and being able to play for Arsenal is unreal,”

You obviously had a great time at Southampton. Was it a tough decision to leave there?

Obviously it was important for me in my career to come here. They gave me the opportunity to play in the Premier League but it’s amazing this step, to come here and play for Arsenal. To be able to reach this point is unbelievable.

What is it about Arsenal that’s special to you?

For me, Arsenal is a top team. They are a very, very good club, with fantastic fans as well. They are known to be so well supported and for me, it’s a pleasure to be here. Like I said, it’s a dream come true because I always thought about coming here and imagined it, and seeing it happen is really amazing.

It’s a new era here under Mikel Arteta. How exciting is that to be part of?

Yes, it’s good to watch. I’ve been watching the last couple of weeks as well. You can see that something changed, definitely. There is a lot of work to do but definitely already his ideas have started to appear in the game, that is good. I am sure Arsenal will be very successful.

What have you seen from this team under Mikel Arteta in the last few weeks? What are the changes that you have seen?

I see a team that wants to assume the game, a team that is comfortable to have the ball, and I see everyone looks like they are working hard when they lose possession as well. There’s a high press and then it’s all about controlling the opponent and trying to score as well. I think Arsenal is in a good way.