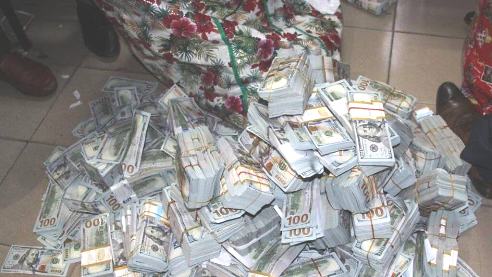 …as a warehouse with Pangolin Scales worth N10bn uncovered in Lagos

Col. Hameed Ali (rtd), Comptroller-General of NIS told newsmen at the airport on Tuesday that the consignment was packed in a coaster bus and loaded in six Bagco bags with one suspect arrested in connection with the sum.

According to him, the consignment was intercepted at about 1200hrs on January 16, 2020, at the E- Wing of the tarmac of the Lagos Airport.

The next day, Saturday, January 18, 2020, Ali said the service took an inventory of the consignment in the presence of the Directorate of State Security, Customs intelligence unit, anti-money laundering and counter-terrorism financing unit, customs police and the suspect where the sum was confirmed.

He said that the command was able to intercept the sum through credible information gathered on the day the consignment was supposed to be moved out of the country.

He explained further that the service was conducting an investigation into the consignment, the real owners and cohorts in the attempted smuggling, adding that after thorough the investigation, the fund and the arrested suspect would be handed over to the Economic and Financial Crimes Commission (EFCC) for further interrogation.

He explained that names were written on each wrap of money, which were in $100 denomination.

He, however, noted that it was not a crime to ferry money out of the country, but noted any amount of money in excess of $10,000 must be declared to customs by the owners.

“The question is often asked, why do customs or any agency of government need to know if a private person or company is taking out monies for their personal business out of the country. It is for the reason that illegal criminal activity like international terrorism, drug smuggling, arms proliferation are financed by illicit cash movements outside the recognised financial systems.

“Proceeds from other criminal activities like corrupt enrichments from public treasury are similarly siphoned out of the country in cash. To enforce compliance with the monitoring of cross border cash movement, registers are maintained all approved points of entry and exit, where voluntary declarations are maintained. The declaration is then followed up by EFCC to ascertain any possible link between the cash movers and criminal networks.”

Also commenting, Mr Wale Adeniyi, the Customs Comptroller of MMIA Command, said that since the command was created in August 2019, it had recorded lots of improvements and vowed that it would not relent in its efforts at cleansing the country.

“The management of customs wanted a better patrol of our airport to ensure laws are followed as regards international travels. One of our intelligence led to the discovery of the latest seizure at the airport.”

In a related development, the Customs Service, Federal Operations Unit (FOU), Zone A, Ikeja, uncovered a  criminal hideout, located at Isheri Estate, Lagos, where 2x20ft containers stacked with 147 Bags of Pangolin Scales, worth over N10.2 Billion was recovered.

Pangolin which is internationally categorised as an endangered species has since been prohibited for importation or trade, and Nigeria is a signatory to Convention on International Trade of Endangered Species (CITES).

He said the seizure which was made on January 19, 2020, will be handed over to the National Environment Standard and Regulations Enforcement Agency (NESREA), for further investigation.

In his words: “ The roving team of the Nigeria Customs Service, FOU Zone A, while acting on credible intelligence uncovered an abandoned warehouse at Isheri Estate Lagos, where 2x 20ft containers were stacked. The containers were immediately evacuated to the premises of FOU, Ikeja, where physical examination revealed 147 sacks weighing 9,504.1kg of Pangolin scales worth N10,264,428,000.

“Pangolin is a globally prohibited animal because they are at the verge of extinction and they are at protective custody. This seizure shows you the amount of tenacity on the part of smugglers. This is a collection from the entire west African countries and been transported through Nigeria. I am sure the World Customs Organisation (WCO), will send us a commendation letter,” he said.