Industry stakeholders have condemned the recent move by the government of the Republic of Benin to stop all Nigeria-bound trucks laden with transit goods coming from Cote D’ivoire, Ghana and Togo,

The Beninese government tactically prevented the trucks from passing through its border to Nigeria. The decision stakeholders said to be retaliation over Nigeria’s closure of its borders in 2019, which lasted for more than one year.

We learnt that during the border closure, Beninese who transact one or two businesses at the Seme-Krate border practically lost their means of living.

Presently, over 3,700 Nigeria-bound trucks laden with transit goods worth several billions of naira are still trapped between Ilakoji, a border between Togo and Benin.

Already, The Benin government has imposed a new import duty payment of CFA 9 million, per every transit truck laden with Nigeria-bound goods, an equivalent of about N6.5 million which, are exempted from all forms of duty under the Economic Community of West African States (ECOWAS) protocols on transit goods.

It was gathered that the Cotonou government claimed that it suspected the goods are not produced in West Africa. Meanwhile, importers countered the claims and stated that the Benin authority wants to be collecting full duty on those goods.

By law, a transit good is not supposed to pay a kobo because, in the transiting country, it will just pass through but the trapped trucks could still not cross the Ilakoji border and Seme border up till now, according to importers.

However, all efforts by the ECOWAS to intervene have been futile. The Cotonou government during their meetings with ECOWAS said Togo and Ghana never offended them that it is Nigeria they want to deal with.

Meanwhile, some importers who spoke with our reporter lamented that the majority of the goods are to be sold during the Sallah festival but they could not move them down to Nigeria even as they have collected part payment from their customers.

However, stakeholders in the nation’s maritime sector blamed the Federal Government’s fire brigade approach policy for the decision of the Republic of Benin to stop Nigeria-bound trucks laden with transit goods from passing through its border.

On the new development over the trapped goods, the Chairman of the Association of Nigeria Licensed Customs Agents (ANCLA), Seme border chapter, Bisiriyu Fanu, said that the issue has not been resolved, saying that they were told to wait and see what would happen immediately after the Sallah.

“For now, nothing yet and the trucks are still there. The only thing is that anybody who wants to bring in their goods went through Togo and containerised their goods and brought it to Abba. That is the information I have for now,” he said.

The National Vice President, ANLCA, Kayode Farinto, said: “There is something we called the law of reciprocity in international relations. That is whatever you give; you take or whatever you do to your neighbour, expect it in return.

“When government actually implemented the border closure policy, blocking the border forgetting Nigeria is a signatory to ECOWAS protocol and convention, we shouted that this a thing should not last more than 30 days but the Government took caution to the wind and it was done for almost one year,” he said.

According to him, so if Benin is now stopping Nigerian trucks, which means they are targeting the Nigerian economy. That is a very dangerous trend. It is allowed in international relations and it is called the law of reciprocity.

He said the Nigerian government has to go for what is called dialogue or diplomatic shuttles so that the issue would not boomerang more than what it is now.

“Ordinarily, it is unfortunate that this is happening because our experts on international relations failed to look at the implications of most of the laws and policies that are being implemented by the Federal Government. You should expect the Benin Republic to do what they did. Don’t forget that many Beninese lost their businesses and it was due to this singular policy.

“You want to shut down the economy of the neighbouring country; there was no information abnitio. There was no negotiation and even when you did that; The Beninese sent their hand of fellowship ready to comply with most of your policies.

But what did we have? We have a situation where Nigeria Customs Service (NCS) and the Federal Government did not even know what to demand from Benin,” he added.

He said that it is so unfortunate that it is still the masses that will suffer it. He said in economic history, what is happening is a very dangerous thing for any country.

President, Africa Association of Professional Freight Forwarders and Logistics of Nigeria  (AFFLON), Otunba Frank Ogunojemite, said: “If you asked those drivers that drove in the consignments, they would have been facing the problem only because the border was being closed. Of course, border closure is not the best,” he said. 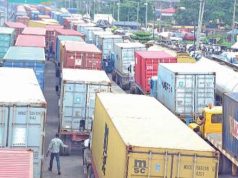