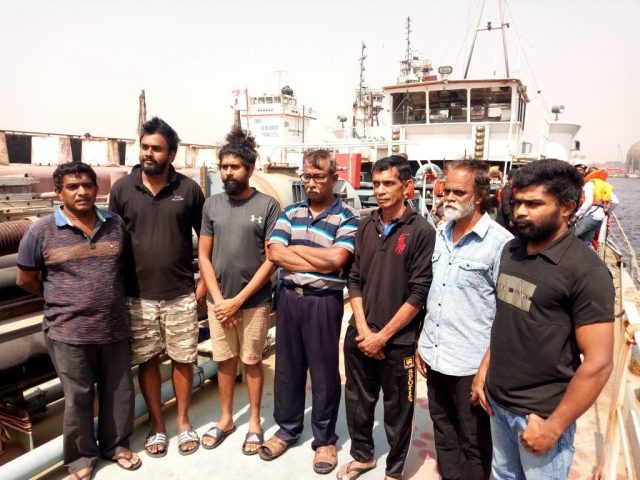 The Nigerian Navy on Friday handed over 57 Nigerians, seven Sri-Lankans and two Ghanaians, suspected to be involved in oil bunkering to the Economic and Financial Crimes Commission.

The News Agency of Nigeria also reports that the seven vessels, involved in the oil bunkering and having no valid approval, were arrested by the Nigerian Navy between December 3 and 30, 2019.

While addressing newsmen after the handing over to the EFCC, the Commandant of NN ship, NNS BEECROFT, Commodore Ibrahim Shettima, said the nation would have lost N906,250, 000, if the culprits had been successful in their operation.

“This (arrest) has prevented a huge potential loss of petroleum products for the nation.

“These illegal activities are the work of unpatriotic and criminally minded Nigerians and their collaborators,” he said.

The commandant gave the names of the seven vessels as MV TIM BEGELE, which was laden with 381 metric tonnes of Automotive Gas Oil and was arrested on December 3.

Also, MV Ella, which had one Ghanaian and 6 Nigerians on board, was arrested on December 27, carrying 100 metric tonnes of AGO.

Similarly, MT IBIM, which was arrested on December 27 was laden with 840.5 metric tonnes of crude oil and had a crew of 14 Nigerians on board.

While MV LAIDA with one Ghanaian and seven Nigerians as its crew members was arrested on December 30 and was arrested carrying 180 metric tonnes of AGO.

Shettima said after diligent interrogation and investigation, most of the vessels were en route neighbouring countries, with their illegally acquired products.

The Navy commandant warned that criminals should desist from their acts by pursuing lawful means of livelihood, adding that the NN would not spare any illegality.

“The NN has the range and reach to pounce on them any day, anytime.

“We also want to use this medium to reassure our neighbouring countries that we will continue to collaborate and work with them in fighting this menace,” he said.

He said the Chief of Naval Staff was determined to extend the fight against illegally acquired crude and its products from the creeks to the high sea.

During the raids, about 250,000 of 25 litres of jerrycans used for illegal siphoning of PMS were recovered and destroyed.

Shettima said the arrest was part of the CNS strategic guidance to increase the operational potency of the Nigerian Navy in curbing illegal activities within Nigeria’s maritime environment.