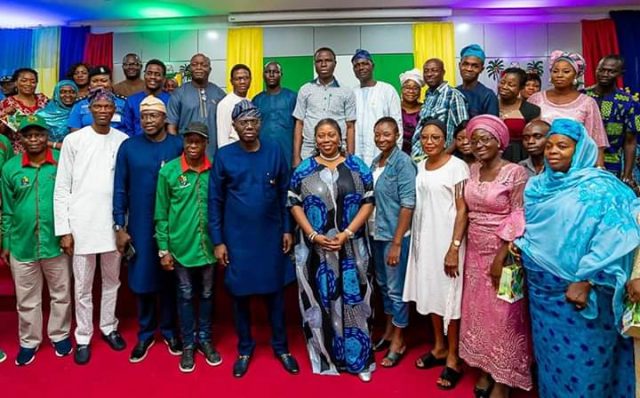 It was all outpouring of emotions and joy, on Friday, at the Banquet Hall of the State House in Alausa on Friday when Lagos State Governor, Mr. Babajide Sanwo-Olu, presented keys to beneficiaries of his administration’s maiden rent-to-own housing scheme.

Governor Sanwo-Olu allotted all the apartments of the Lateef Kayode Jakande Housing Estate in Igando to 492 families certified by the State’s Mortgage Board to benefit from the scheme. The allocation came four months after the housing estate was completed by the Sanwo-Olu administration.

A 56-year-old widow, Mrs. Fatimat Kosoko, betrayed emotion as her name was being announced to benefit in the scheme.

The mother of four, who is a staff of the Ministry of Education, said the scheme had brought a “huge relief” to her family, eight years after she had been struggling to provide decent accommodation for her children, following husband’s demise. She got a 40 per cent rebate on the monthly payment to service the mortgage.

Sanwo-Olu described the development as “a promise kept ahead of time”, noting that his administration’s modified rent-to-own housing scheme took off earlier than expected.

The Governor reiterated that provision of decent homes for a large number of residents across the State remained a key thrust of his administration’s social intervention scheme, stressing that his Government had introduced a simple mortgage model to expand the opportunity to low-income families.

He said: “We cannot overemphasise how critical housing is to all residents. We made a promise that we will deliver decent homes to our people. For us to start fulfilling this promise earlier than we predicted, it shows the credibility and our readiness to stand with our pledges to Lagosians. It’s a promise kept ahead of time.

“Therefore, it is with great pleasure to hand over keys to apartments of Lateef Kayode Jakande Gardens to all beneficiaries selected by the Mortgage Board. Shelter, as we all know, is critical to fulfilling all other activities of life. Home ownership is a mark of great accomplishment, especially in city like Lagos. My joy knows no bound as ordinary people now boast of owning decent homes under my administration.”

The Governor said the delivery of affordable housing to low-income residents underscored “irrevocable commitment” of his administration to actualise its agenda of building a 21st century economy and attaining ‘Greater Lagos’.

Sanwo-Olu promised that his Government would continue to make more impacts through social intervention schemes, pledging that other ongoing housing projects would be completed.

He also said the welfare of the State workers would be a priority of his administration, disclosing that he had directed the Ministry of Housing to reserve 10 per cent of the properties developed by the Government for civil servant to keep them committed to the service of the State.

The Governor advised those who missed out in the maiden housing scheme not to lose hope; their applications, he said, would be re-considered in the subsequent schemes coming later in the year

Sanwo-Olu urged the allottes to take ownership of the Estate by maintaining all facilities provided in the Estate.

Commissioner for Housing, Hon. Moruf Akinderu-Fatai, said all housing schemes initiated by the previous administrations were being speedily worked on for completion on the order of the Governor.

He disclosed that the Government would be delivering additional 360 homes in Igbogbo, 744 homes in Sangotedo, 660 homes in Agbowa and 680 apartments in Egan Igando.

He said: “We are working on innovative strategies, which will enable us use technology to reduce time of construction, increase quality of homes and reduce the cost of building to make the housing scheme more affordable.”

He said the the Sanwo-Olu administration’s modified rent-to-own scheme had given relief to applicants by making them pay 5 per cent commitment fee and spread the balance on monthly basis for over a period of 10 years.

Akinderu-Fatai said the housing scheme was conceived with the objective to create first-time home owners within the next four years.

A beneficiary, Sonoiki Idowu, who was once one-day Governor in Lagos, could not hide his joy after being presented with the key to his apartment.

He said: “I’m coming from a background where we can’t afford to rent a good apartment, much less buying a home. Today, I can say I have owned a decent home. May God bless Mr. Babajide Sanwo-Olu for this wonderful housing programme.”