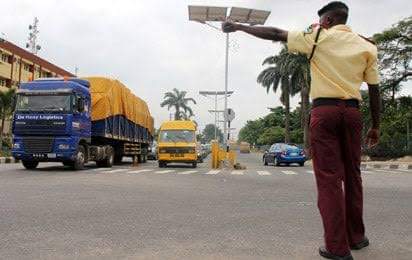 The governor demanded an improvement in the free-flow of traffic statewide, with full enforcement of the Lagos State Traffic Laws and arrest of all traffic offenders without preference for civil servants, party members, security agencies, friends and family and so on.

The Lagos State Traffic Laws, passed by the State House of Assembly, was designed to protect law abiding road users, while violators face the consequences of their actions. The sanctions range from N5,000 fine to N50,000, jail terms and forfeiture of vehicles.

But the new regime has introduced a severe penalty of N200,000 for one-way offence, such as is not known to the subsisting traffic laws. Also, all the violations that erstwhile had no monetary penalties now attract fines of between N20,000 to N90,000.

For instance, offences like failure to use seat belt, unclosed doors or standing on the doorway while in motion, all attract N20,000 each. Parking on the highway, obstruction of traffic, picking or dropping passengers on illegal bus-stop attract N50,000 fine.

Also, making a reverse on the highway, driving on kerbs and parking on walkways now attract N50,000 penalty. Driving on BRT designated lanes is N70,000, while dropping passengers on laybys is slammed at N90,000 fine. And for every night a seized vehicle spends in the custody of LASTMA, a N1,000 fine is paid.

The Guardian learnt that the severe penalty regime was the initiative of the LASTMA hierarchy, “to ensure that apprehended violators do not easily get out of the offence, unlike before. The law says we should impound a vehicle that drives against traffic, which is the most common traffic offence these days.

“But giving them a fine of N50,000 is like a slap on the wrist. But with N200,000 fine or risk of impounding and being shown on camera during mobile court trial, they will think twice. The essence is deterrence,” a top official said yesterday.

The Guardian observed that the option before a one-way offender, among others, is to appear in court or appeal for out-of-court settlement and submission to fine.

The “lesser evil” of fine requires the one-way violator to sign an undertaken, pleading guilty to other lesser traffic offences, but not one-way. The violator would later realise that the penalty for the lesser offences all summed to about N200,000.

The mobile court option is not any better. It goes with a court bond of between N100,000 to N150,000 initial fine payable by a violator who is still on trial. With the bond paid, the offender’s vehicle is released but must keep appearing in court till the case is closed.