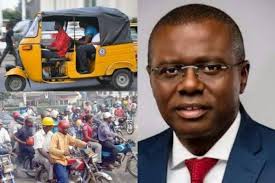 The Lagos State Governor, Babajide Sanwo-Olu has declared that the ban on commercial motorcycle and tricycle popularly called Okada and Keke Napep in the state would not be reversed.

Sanwo-Olu explained that the ban was due to security and safety reasons, hence it will not be reversed.

“Let me tell you about the ban which we just enforced. We will sustain the ban on Okada and tricycles, mainly because of security and safety reasons.

“The security and safety of citizens are paramount to any government. As a responsible government, we will not fold our arms and allow any security breach in the state.

“We will continue to ensure the safety of our people on all fronts. There have been reports of serious security breaches and safety concerns in areas where these operators ply. We had to respond to these concerns because of life and safety matters to this government,” says the governor.

It had been reported that the State Government recently placed a ban on the operation of Okada and Keke Napep in some local government areas and local council development areas in the state.

The ban took effect from February 1st, 2020, and was disclosed in a statement by the state’s Commissioner for Information and Strategy, Mr Gbenga Omotoshoare this: