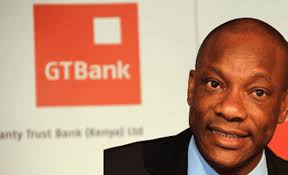 Guaranty Trust Bank plc (GTBank) has reported 32.8 per cent increase in its Unstructured Supplementary Service Data (USSD) transactions in 2019 to N3.55trillion as against N2.68trillion reported in 2018.

On mobile banking value last year, GTBank reported total value of N8.76trillion as against N5.8trillion reported in 2018, indicating a 50 per cent growth on year-on-year performance.

The Chief Executive Officer, GTBank, Mr. Segun Agbaje had said the bank would continue focusing on caring about human feelings to win the digital payment space in future.

He said, ”I will be lying if I tell you that the bank that will win the payment space in future is one with the best technology.

“So, the person that is going to win, whether a FINTECH, a TELCO or a bank, is one that is going to build the right technology that can leave customers with that feeling that there are people who care about them and not artificial intelligence.”.

“In addition, we have “Habari”, a digital platform for children. No matter what the people say, it is the most successful interactive platform in Nigeria today”, Agbaje said.