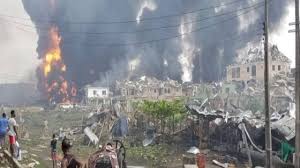 Reports that the explosion in the Abule Ado community of Lagos State in the early hours of Sunday, March 15th was caused by pipeline vandalism has been debunked by the National Emergency Management Agency (NEMA).

The real reason for the explosion according to the management of the Nigerian National Petroleum Corporation (NNPC) was a truck that struck gas cylinders in the community.

In a statement released by NNPC, it was gathered that the gas cylinders which were hit by the truck were stacked in a gas processing plant located near the corporation’s System 2B Pipeline Right of Way.

The corporation explained that preliminary findings indicated that the impact of the explosion was so huge that it led to the collapse of nearby houses and damage to the NNPC pipeline which caused the resultant fire.

Sadly, a couple and their three children have been reported to be among the 17 persons confirmed dead in the explosion.

According to reports, the couple and their children were caught in the fire caused by the explosion while driving in their vehicle to church.

So far, 17 bodies have been recovered while 25 casualties are being treated for injuries on site.

Over 50 buildings in the area and neighboring communities were affected by the unfortunate incident. 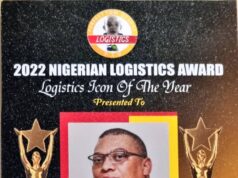