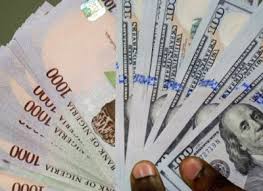 *Inflation is currently at  20.52% as forex scarcity bites harder

The Nigerian currency, the Naira, at weekend to close at N712 to the dollar on the black market, and gained slightly on the spot market on the last trading day of the week, however, depreciated steadily in the unofficial market within the week, as external reserves monitored by the Central Bank of Nigeria (CBN) dropped by $203.507, 037 million in six days.

However, the Naira gained marginally against the dollar on Friday, appreciating 0.04 per cent a day after it fell at the spot market. But overall, the currency continued a fall that has been made worse by increasing demand for dollars.

The currency opened trading at N434.83 per $1 but closed at N436.33 to a dollar as against N436. 50 it traded in the previous session on Thursday, data from the FMDQ website, where forex is officially traded, showed.

But the currency weakened to N436.50 on Wednesday, the same rate it traded on Thursday. It gained marginally on Friday, closing at N436.33.

At the parallel market, the naira lost significantly during the week, dealers said.

On Monday, traders said they bought the dollar at N710.00. It depreciated to N711.00 and N712.00 on Tuesday and Wednesday respectively, Abuja black market traders said.

On Friday, traders said they bought the dollar at N714.00 and sold at N715.00 and above within the business period.

However, the nation’s foreign reserve has been on a downward trend due to the constant intervention by the CBN in the official market to maintain the stability of the local currency.

Further breakdown, shows that the reserves opened first trading day (Monday) of last week. 19th of September, 2022, at $38.569 billion, a slight decline of 0.20 per cent from $38.65 billion recorded on the 16th of September, which was the last day of the previous week.

The reserves, which continued on the downward trend further dropped to $38.539 billion as of 20th September 2022, representing a slight decline of 0.1 per cent, compared to the previous day’s figure.

By Wednesday, 21st of September, 2022, the nation’s foreign reserve had declined to $38.51 billion, a slight decline of 0.07 per cent from $38.54 billion recorded the previous day. Before settling at the current figure of $38.485billion last Thursday.

However, despite the external reserve’s downward trend, finance experts believed that Nigeria’s central bank, which is in charge has enough reserves to continue to intervene in the official market to maintain the stability of the local currency.

The legitimate users will be able to access forex only once in two quarters, which was different from their previous approval to travellers who applied once every quarter.

Findings revealed that the development arose due to the lingering forex scarcity in the financial system.

Some banks have reached out to their customers that the full Personal Travel Allowance and Business Travel Allowance ($4,000 and $5,000) respectively will now be disbursed into their Travel Card, informing them that all applications will be in line with regulatory requirements.

In fact, a member of the Monetary Policy Committee, Prof. Mike Obadan, said in his personal statement released by the apex bank after the last MPC meeting that access to forex was a challenge.

He said, “On the part of the monetary authority, there is no doubt that it is in a difficult situation because of excess demand for foreign exchange in the face of a rather uncomfortable foreign exchange supply situation.

Some analysts have rightly wondered why the Bank should, for example, continue to provide foreign exchange to fund primary, secondary and undergraduate education abroad in an era of serious forex shortage. It is true that many public schools are in bad shape.

The CBN Governor, Godwin Emefiele, earlier in the year, announced the bank would stop the sale of foreign exchange to Deposit Money Banks by the end of 2022.

It had earlier stopped forex allocation to the Bureau de Change operators in 2021.

The CBN governor launched its programme tagged ‘RT200 FX Programme’ to boost forex supply in the country through the non-oil sector in the next three to five years.

“The RT200 FX Programme is a set of policies, plans and programmes for non-oil exports that will enable us to attain our lofty yet attainable goal of $200bn in FX repatriation, exclusively from non-oil exports, over the next three to five years,” he said.