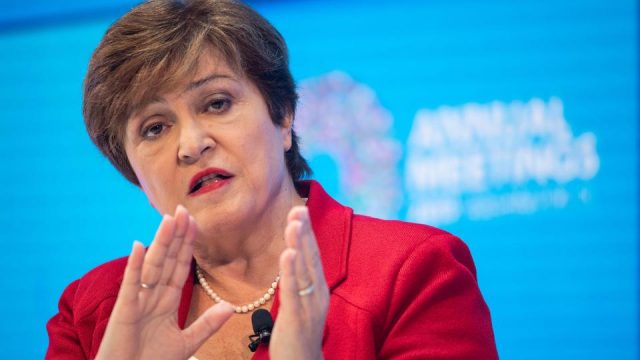 International Monetary Fund, IMF in a blog post said that “an unprecedented 345 million people’s lives and livelihood are in immediate danger from acute food insecurity.
It further said that around the globe more than 828 million people go to bed hungry every night, according to the World Food Programme. Food insecurity has been rising since 2018. Even before Rusia’s invasion of Ukraine, the increasing frequency and severity of climate shocks, regional conflicts and the pandemic were all taking their toll’ disrupting food production and distribution, and driving up the cost of feeding people and families. The situation took an even more dramatic turn with the war in Ukraine. This pushed the prices of food and fertilisers higher still—hurting importers and prompting several countries to impose export restriction.

The result is an unprecedented 345 million people whose lives and livelihoods are in immediate danger from acute food insecurity. And around the globe more than 828 million people go to bed hungry every night, according to the World Food Programme. The impact of the food shock is felt everywhere. The suffering is worst in 48 countries, many highly dependent on imports from Ukraine and Russia—mostly low-income countries. Of those, about half are especially vulnerable due to severe economic challenges, weak institutions, and fragility. Alongside the human toll, the financial costs are also escalating.A new paper by IMF staff estimates the impact of higher import costs for food and fertiliser for highly exposed to food insecurity will add $9 billion to their balance of payments pressures—in 2022 and 2023. This will erode countries’ international reserves, and their ability to pay for food and fertiliser imports. In many places, even though food prices have eased somewhere from recent peaks, still high food—and energy—prices have fuelled a cost-of-living crisis that is likely to increase poverty and hurt growth, potentially fuelling political instability. As a result, policymakers in many countries have introduced fiscal measures to protect people from the current food crisis. For this year alone, we estimate that highly exposed countries need as much as $7 billion to help the poorest households cope.

It said that “strong and swift policy action is needed across four areas to mitigate the global food crisis and avert human suffering. First, rapidly and adequately support people vulnerable to food insecurity through humanitarian assistance from the World Food Programme and other organisations, alongside effective domestic fiscal measures. Policymakers around the world should prioritise fighting inflation and protecting the most vulnerable to alleviate the burden of the cost-of-living crisis. Near-term social assistance should focus on providing emergency food relief or cash transfers to the poor, such as those recently announced by Djibouti, Honduras, and Sierra Leone. Where this is not possible, second-best subsidies and tax measures can provide temporary relief. Second, maintaining open trade, including within regions, to allow food to flow from surplus areas to those in need. We should build on the progress made under the Black Sea Grain Initiative and at the 12th Ministerial Conference of the World Trade Organisation by urgently phasing out export bans imposed by major food producers. Protectionist measures only serve to make the food crisis worse, accounting for as much as 9 percent of the increase in world wheat prices, according to the World Bank Group.

“Third, increase food production and improve distribution, including through ensuring adequate access to fertilisers and crop diversification. Increasing trade financing and reinforcing supply chains is vital to addressing the current food price shock. The World Bank and other multilateral development banks play a key role as they increase trade financing for agricultural commodities and other food products and their support to countries for critical logistics and infrastructure upgrades. Fourth, investing in climate-resilient agriculture will be vital to increasing future harvests. More intense and more unpredictable climatic events are increasing food insecurity. Low-income countries, particularly in sub-Saharan Africa, are among the least prepared to face the effects of climate change. Solutions should be tailored to country circumstances, with a focus on low-cost, high-impact measures, such as investing in new crop varieties, improving water management, and information dissemination. For example, Ethiopia, Kenya, and Rwanda are leveraging mobile technology to provide farmers with rainfall forecasts to optimise the planting of crops and the purchase of crop insurance.

“The international community must also take decisive action to ensure that the needed financing is in place to deal with the immediate crisis and to strengthen food security in the medium-to-long term. Institutions specialised in food security, such as the World Food Programme and the Food and Agriculture Organisation of the United Nations, need to be adequately funded because they play a vital role with their local presence in many nations and an unwavering focus on the human cost of acute food insecurity. More grants and concessional financing from donors and international organisations, are urgently needed to support cash and in-kind assistance for people suffering most acutely from food insecurity. In some countries, debt relief will also be needed. As an additional line of defence, IMF financing supports countries in meeting external financing needs associated with the global food shock. Since Russia’s invasion of Ukraine, new Fund-supported economic programs in Benin, Cabo Verde, Georgia, Mozambique, Tanzania, and Zambia, included policies to address the impact of the food crisis. Additional financing for existing programs in Jordan, Moldova, Pakistan and Senegal provided support for additional measures to strengthen social safety nets and address food insecurity.

“A new food shock window under the IMF’s emergency financing is expected to be approved this week by our Executive Board. The proposed window will provide increased access to emergency financing for a year for countries that are most vulnerable. Where grants and concessional financing from partners are not enough, or a Fund-supported program is not possible, it will offer a new channel of IMF support. This global food crisis has staggering humanitarian impact and large financial costs. It requires a comprehensive and well-coordinated approach to ensure complementarity and maximum efficiency in resource use. Together with the World Bank and our global partners, we recently issued a second joint statement calling for action on global food insecurity. We must all act now to ease the suffering of those experiencing hunger, by supporting countries who take strong policy action with the financing they need.