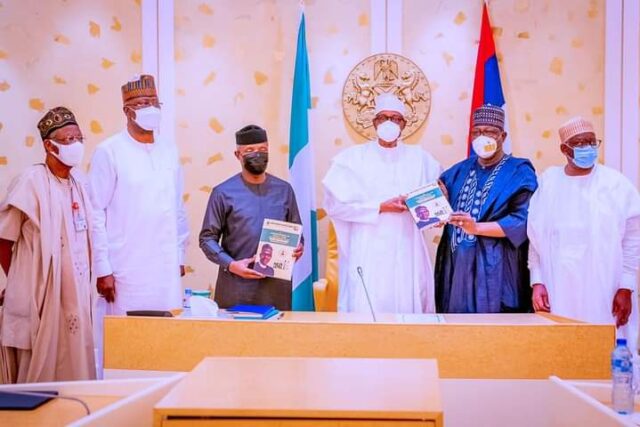 The over 1300 pages book records the Significant milestone achievements by the over seven years of the All Progressive Congress (APC) led government of President Mohammadu Buhari. The compendium which comprises of pictorials and infrastructural evidence cut across all sectors, Agriculture, Rail infrastructure, food Security, Safety nets, Security architecture, Maritme, Airports, Second Niger Bridge among others.

The project which is put together by MBO Dynamic Support Group has already been presented to President Mohammadu Buhari and Vice President Yemi Osinbajo Secretary to Government of the Federation , Boss Mustapha and some top government functionaries at the Presidential Villa, by the National Coordinator of the group, Hon.Usman Ibrahim.

According to the National Coordinator of the Group, Hon. Usman Ibrahim (Sardaunan Samarin Naijeria) the official launching of the book which has gotten the buy in of the Presidency and the All Progressive Congress (APC) have been scheduled for December 8, 2022 at the Aso Villa Banquet Hall.

The elated Hon. Usman Ibrahim said his group took the initiative to compile the tremendous achievements of the Buhari Administration to be documented in a book for future generations to see. He said the Buhari Administration has done a lot in all aspects of the economy which may not be seen today by Nigerians , but with the official launching of the COMPENDIUM, which will be available to the general public, Nigerians will come to appreciate what the APC Government under President Buhari has done and Nigerians will never forget him.

Hon. Ibrahim further said the group move away from politics, but to governance and documentation of the dividend of democracy as provided by the Buhari’s Administration in the last seven years and called on Nigerians to continue to support the Buhari Administration in the remaining months of his tenure to which according to him has led a solid infrastructural foundation for the next Government.