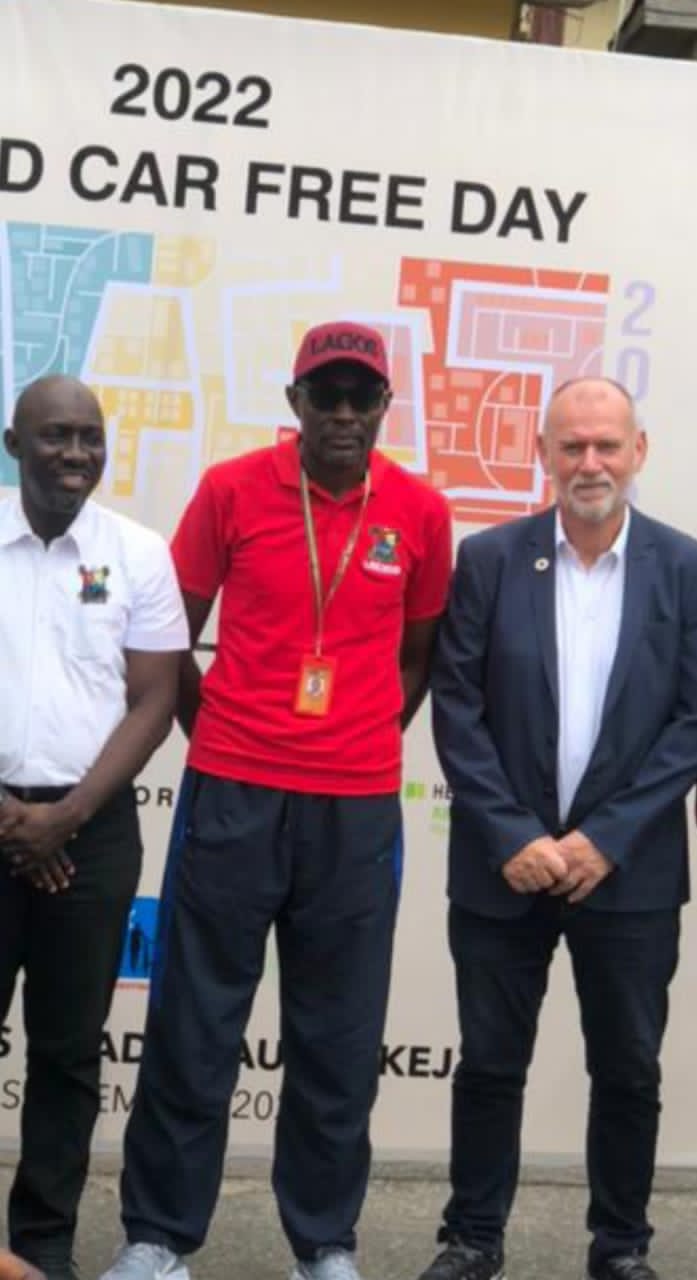 The Governor who said this at the First Lagos Car free day held on Sunday at governor’s road Alausa, Lagos, said the centre of excellence has begun to embrace NMT because of its environmental and economic benefits. NMT is of immense benefit to a State like ours due to huge vehicular activities that pollute the environment thereby causing adverse effects on our health and wellbeing.

Sanwo-Olu, who was represented by the Commissioner for Transportation, Frederic Oladeinde, noted that since the invention of cars in the 18th century, the world has been attached to motor cars and with over one billion motor vehicles on the roads around the globe, it simply means that it would be difficult to escape the pollution, noise and danger that they pose to us.

He explained that his administration has taken it upon herself to promote the Non-Motorised means of Transportation by first drafting the NMT policy and re-introducing the construction of Walkways with a pilot project along Catholic Mission Street/Tafawa Balewa Square Way, Lagos Island.

The Governor noted that car-free days are an opportunity for cities to highlight how congested roads can be used in different ways. They are to remind us that the roads are supposed to be for humans and not for cars, adding that they present us the opportunity to rethink transportation in our cities.

“Let’s just take a moment to imagine how our Lagos would look like with fewer cars, a city where our roads are shared among the different categories of road users with equal access, a Lagos where pedestrians, cyclists, and other road users have equal access to the roads, where they are free and feel safe to use the roads without the fear of being knocked down by cars, or being harassed or molested, the various benefits like environmental, social, economic and ultimately health.

“So, as we mark the first World Car-free Day in Lagos today, we hope that it would not just end here but that it would begin a shift in paradigm, a shift in culture needed for the transformation of the city of Lagos”, he said.

While explaining the importance of the Car-free day, he said, “For us to understand why this Day is so important, it is vital to understand air pollution and how vehicles contribute to this. When fuel is burned by our vehicle, pollutants are emitted and gasoline fumes escape into the air and this has an adverse effect on our health.

“Car Free Day is therefore highly beneficial to us in the sense that it promotes other forms of transportation.

“We all know that bicycle for instance has a lot of advantages many of us do not think of?, bicycles are no doubt a great way to ensure that we stay healthy because we engage in exercise when we make use of them”, he explained.

He, however, added that exercising is one thing most of us increasingly find difficult to do nowadays because of our busy schedules.

Therefore, by switching your car for a bicycle and walking when taking your journey to work, for instance, you are going to be able to add some exercise and fresh air to your routine which is good for you and without impacting your schedule or having to find more hours in the day.

“Our vision for an integrated Multimodal Transportation system that will not only meet the transport needs of our people but reposition it to make it rank among the best in the world is achieved.

“Lagos State government is making tremendous efforts to make transportation in the state more effective, efficient and sustainable through its several infrastructural, policy, and institutional reforms.”

Also, speaking at the event, the Managing Director, Lagos Metropolitan Area Transport Authority (LAMATA), Mrs Abimbola Akinajo, said LAMATA is proud to be associated with the World Car-free Day celebration in Lagos for 2022. The objectives of the World Car-free day are in tandem with our vision for entrenching a non-motorized transport (NMT) system in the state as contained in our Strategic Transport Master Plan.

Abimbola Akinajo, who was represented by Engineer Konyeha Osa, stated that the first international car-free day was observed on 21st September 2000 through the World Car-free Day programme launched by Carbusters, now World Carfree Network. A number of cities around the world had joined the World Car-free day, which is an event that “promotes improvement of mass transit, cycling and walking, and the development of communities where jobs are closer to home and where shopping is within walking distance”.

“The car-free day in Lagos this year is therefore significant in the sense that Mr Governor’s vision is for Lagos to have a sustainable integrated transport system that promotes the growth of Lagos. Walking and cycling as forms of transport help promote a healthy environment free of carbon emissions. One of our rail lines, the Blue Line, will be powered by electricity in our quest to cut down drastically tailpipe emission on the Lagos Badagry corridor”, he said.